Therefore, I bought the Moen GXS75C Host Series continuous feed garbage disposal. If you, too, are planning to buy it and wondering whether it’ll be efficient enough for your kitchen or not, read this detailed review.

I have covered all the essential features, including its capacity and installation, and talked about its pros and cons as well.

So let’s get started and help you decide if you should buy the Moen GXS75C or not.

Checking the features and how they work is essential before getting a garbage disposal. Therefore, I have explained the primary features of the Moen Gxs75c Continuous Feed Garbage Disposal and how they perform to help you understand whether it’ll be compatible with your home kitchen or not.

Let’s begin with the design and size first. I know most of us want a compact garbage disposal that does not take up the entire under-sink space. The Moen GXS75C weighs only 7.75 pounds, which is suitable for most households.

After installing this garbage disposal, I was still left with so much space to use for storage. If space is an issue in your kitchen and you don’t want to let go of the under-sink area, the Moen GXS75C will be a perfect pick for you.

I love the all-black exterior, which gives a sleek aesthetic look, unlike any other garbage disposal. Design is the last thing people care about while buying a garbage disposal, but if you need a standard, sophisticated model that blends with your kitchen interior, this one will fit perfectly well.

Due to its lightweight design and the Universal Xpress mount, the Moen GXS75C is extremely easy to mount. It’s designed in a way to fit most existing assemblies, saving the cost of buying extra tools to install the garbage disposal.

All you have to do is give it a few twists and secure it well so that it does not get loose over time. You also get a pre-installed power cord, so there is no need to buy one extra. The power cord does not have hard-wiring; you can do it separately if you feel the need.

The ⅞-inch dishwasher inlet lets you connect the Moen GXS75C to your dishwasher as well. Please turn off the power and water first before installing to avoid unwanted circumstances.

Powerful Motor That Grinds Everything

The motor is one of the most crucial features of garbage disposal. Most of the time, we mindlessly dump everything in the sink that eventually blocks the waste pipe.

This is one of the reasons I got a garbage disposal so I don’t have to clean my blocked waste pipe.

The best part about the Moen GXS75C is its extremely powerful motor.

The ¾ Horsepower with 2700 rpm provides fine grinding and gets rid of all kitchen scraps.

I love cooking and experimenting with different recipes, which means more kitchen waste.

I must say that the powerful vortex motor of Moen GXS75C does what it promises.

The continuous feed system and fast grinding turn everything into tiny particles, allowing all the waste to quickly pass through the waste pipe.

The Moen GXS75C host series is equipped enough to clean fruit pits and vegetable peels, cooked meat, small bones, and most of the waste a household kitchen produces.

The Moen GXS75C Host Series has excellent build quality, ensuring years of functioning. The exterior and the interior grinding chamber is made from stainless steel to keep the garbage disposal rust and corrosion free.

But I recommend that you clean the outer part with a wet towel to keep the garbage disposal sleek and shiny.

The Moen GXS75C garbage disposal provides 10 years warranty with in-home service. If your garbage disposal stops working or if you face any malfunction during this period, call their helpline number to get immediate help.

One of the most irritating things about garbage disposals is that most of them are very noisy. It’s a pain to the ears to work in the kitchen while garbage disposal works.

Thanks to the Sound Shield technology of the Moen GXS75C, it provides sound-deadening insulation. The Moen GXS75C is pretty quiet compared to most garbage disposals in the same range.

It lets you work in peace without the sound bothering you much. But noise sometimes depends on the type of sink you have. Some sinks can’t handle garbage disposal vibration leading to more noise.

After seeing all the features of the Moen GXS75C, here are the pros and cons of the machine based on my observation-

In my opinion, the Moen GXS75C is one of the best garbage disposals out there. After using it for more than five months, I must say I hardly have any complaints about it.

First, I love how compact it is. It did not take me more than an hour to install the garbage disposal, but yes, you’ll need a helping hand while installing it.

Secondly, it grinds all types of food and escapes easily. As I said before, I love cooking, and being a non-vegetarian, my kitchen produces lots of garbage.

The Moen GXS75C is similar to the Waste King L-3200 Garbage Disposal with Power Cord, 3/4 HP when it comes to grinding.

It grinds everything into super fine particles so that everything passes from the waste pipe easily and reduces waste production as well.

I am very particular about my home interior and didn’t want an odd-looking garbage disposal.

But I love the design of this Moen GXS75C; the full black solid body fits perfectly well in my kitchen.

But I try not to throw large bones as I am not sure how efficiently it’ll grind them, and also don’t want to exploit my garbage disposal by throwing everything.

Please note that I have a family of four, for which the Moen GXS75C works great. If you have a bigger family of 6 or 7 members, you may consider getting one with a more powerful motor.

What To Do If My Moen GXS75C Host Series ¾ HP Garbage Disposal Ever Jams Or If My Kids Accidentally Drop Something?

You can unjam this garbage disposal using an unjamming wrench or a wooden spoon if you ever drop anything accidentally.

I hope this detailed review of the Moen GXS75C Host Series has helped you decide if it’s the right garbage disposal for you or not. This garbage disposal is working perfectly fine for me, and I haven’t faced any issues yet.

However, every kitchen has different requirements, so make sure you read the features well to make an informed decision. 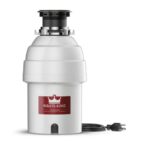 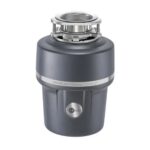 Your new life post-60 should be all about fun and leisure. You shouldn’t have to think about back aches or locked joints while doing something as simple as cleaning dishes. So, you must know about the best dishwashers for elderly users.    A dishwasher for seniors should be easy to install and operate and allows convenient…

When it comes to a range hood, everyone wants advanced technology in a user-friendly design. That’s what the COSMO 63175S 30″ Wall Mount Range Hood brings – a combination of simple operations and futuristic features.   The COSMO 63175S is an excellent wall mount range that can become the focal point in any kitchen with this…

If you want to cook restaurant-like tender, juicy, flavorful meat, there is no alternative to sous vide cooking. But the problem arises while selecting the perfect sous vide for your cooking needs.  And the issue is escalated by the numerous options you can find on the market. The Instant Accu Slim Sous Vide 800W Precision…